The three 3D commercials will be an extension of the teen-targeted, 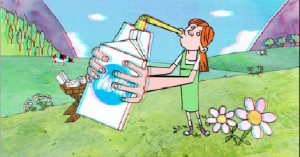 award-winning five-second ‘Dot Spot’ Milk campaign, which launched in the fall of 2007, and has since aired 129 spots. The first to market with a five-second television and cinema Milk advertising campaign, DFC will now also be the first to market 3D spots. The spots will launch at 19 theatres showing 3D movies this summer, beginning with the release of Ice Age 3D on Friday.

“It’s important for the Milk brand to be leading-edge in order to continue to build its relevance with our teen consumer,” says Solange Heiss, assistant director, marketing and nutrition communications, at DFC. “Teens are a very important audience for the brand. Creating a 3D ad campaign demonstrates how we are committed to finding new, fun and effective ways to reach teens.”

The 3D spots each communicate one single benefit for Milk, which is a continuation of the strategy developed a year and a half ago by DFC. In these spots, the benefits are growth, energy and refreshment.

The spots were created by Due North Communications and animated by Head Gear Animation, both of Toronto.

“We were utterly determined that the Milk brand be the first with 3D ads because our teen target prides itself on being at the front of whatever is cool and new,” says Karen Howe, vice-president and creative director at Due North. “Our much-emulated Dot Spots were clearly a home run. Thanks to the seamless collaboration with Head Gear Animation, we think the 3D Dots will be, too.”

“With the upcoming wave of 3D movies, we saw this as an ideal opportunity to shatter the teens’ expectations.”

DFC is completely funded by dairy producers. It promotes the wholesome goodness of dairy products as part of a healthy, balanced diet and encourages good nutrition for all Canadians.

This entry was posted on Thursday, July 2nd, 2009 at 06:34 @315 and is filed under DailyDOOH Update. You can follow any responses to this entry through the RSS 2.0 feed. You can leave a response, or trackback from your own site.