The Great Debate features irreverent discussions about the classic pop 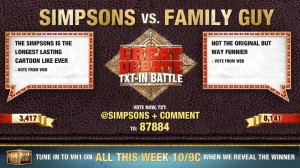 culture arguments of our time, with topics including Star Wars vs. Star Trek, Rocky vs. Rambo, Boxers vs. Briefs, Ginger vs. Mary Ann and more. The program gives viewers the ability to directly participate in the debates through real-time text messaging at Zoom’s nightlife locations in the US, as well as at the Viacom Times Square screen, and via Twitter and Facebook.

“The integrated campaign has been developed to be totally seamless,” says Dan Levi, Zoom’s senior vice-president of digital media.

The interactive platform connecting The Great Debate, social networks and the out-of-home screens, is provided by LocaModa, a company at the forefront of extending interactive media beyond the Web.

Wendy Weatherford, VH1’s vice-president of consumer marketing and promotion, says, “As our audience multi-tasks and time shifts, we are finding ways to reach and engage them wherever they are. Zoom Media’s locations deliver upscale, social young adults who are seeking interactive entertainment, and LocaModa’s platform enables us to have a multi-channel dialogue that was never before possible.”

“This combination of mobile and social programming across broadcast and out-of-home channels is an industry first,” says Levi. “It is a terrific example of integrating multiple media platforms in a way that engages consumers both in and out of their homes, while creating significant awareness and buzz.”

This entry was posted on Thursday, July 9th, 2009 at 08:01 @376 and is filed under DailyDOOH Update. You can follow any responses to this entry through the RSS 2.0 feed. You can leave a response, or trackback from your own site.