‘We Are The Counter Virus’ @DPAAorg PSA

DPAA, in collaboration with independent ad agency Madwell, has launched a ‘We are the Countervirus’ PSA initiative to run on digital out-of-home screens across the globe. At launch, the campaign is running in US, Canada, UK, EMEA, Japan and a few other countries. 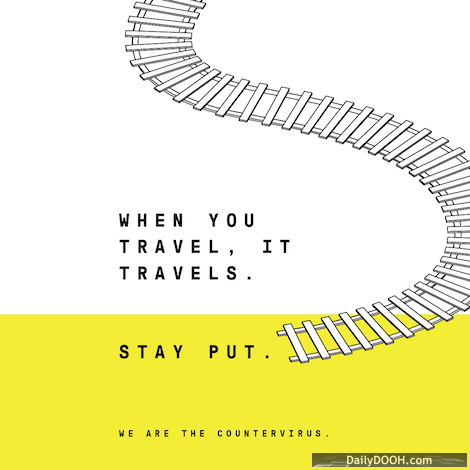 The campaign harnesses the power of digital OOH on a global scale to share information on slowing the spread of #COVID19 by providing actionable, clear steps to #flatteningthecurve. The campaign also encourages people to “spread” their message, reminding the public that this virus takes us to stop infecting us.

The DPAA is fully expecting the initiative to expand throughout the globe on hundreds of thousands of screens.

Madwell CCO Chris Sojka and DPAA president and CEO Barry Frey struck up a friendship when they met on a flight a while back. Recently, they discussed their shared feelings of responsibility to leverage the power of marketing to tackle the pandemic head on. This brought on the idea of the proposal to use the DPAA platform and partners to host the campaign.

Madwell and DPAA are hoping the campaign takes on a life of its own with other entities picking it up and spreading the word via social and other media.

The campaign’s microsite can be found here. Any media owner interested should contact Madwell or the DPAA.

This entry was posted on Thursday, March 26th, 2020 at 13:53 @620 and is filed under DailyDOOH Update. You can follow any responses to this entry through the RSS 2.0 feed. You can leave a response, or trackback from your own site.

One Response to “‘We Are The Counter Virus’ @DPAAorg PSA”