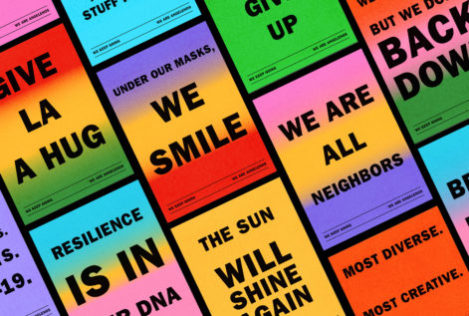 Instead of taking a traditional B2B approach to reach new advertisers, FRED & FARID Los Angeles proposed an alternative initiative to address the emotional weight many Americans were collectively feeling, using JCDecaux’s inventory to display positive and encouraging messaging, reinforcing the feeling of belonging to these great cities. The agency crafted 150 slogans promoting resiliency and embracing the spirit of the four cities, in an effort to create goodwill. With a simple slogan ‘We Keep Going’.

Fred & Farid (founders and chief creative officers) said “No big emotional statement. No hashtag or call-to-action. Just a fact: We keep going. Because that’s all we can do.”

The campaign will be displayed across JCDecaux’s Digital Network of 500 displays, as well as on static inventory in Los Angeles (Outfront/JCDecaux).

This entry was posted on Tuesday, October 27th, 2020 at 10:47 @491 and is filed under DailyDOOH Update. You can follow any responses to this entry through the RSS 2.0 feed. You can leave a response, or trackback from your own site.