These 85″ Panasonic Plasma displays will be available for purchase in Europe in November with a recommended retail price (RRP) of € 28,500 (VAT excluded) and were unveiled at IBC in Amsterdam on Friday. 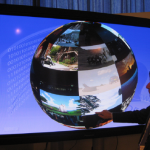 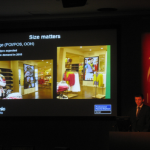 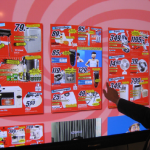 To date Panasonic tell us that they have secured 133 pre-orders across a range of verticals including the rental, leisure and retail markets.

The press release is a little hopeful when it says “The 85” plasma is an equivalent size to four 42” panels … this makes it an ideal size for digital signage since it matches the size of traditional six-sheet print posters” – at € 28,500 each that’s a hell of an expensive digital 6-sheet when folks are ‘managing’ to produce slightly less than full sie 6-sheets including enclosure for 10 – 15 K in total!

Enrique Robledo, Panasonic’s Plasma Marketing Manager in Europe told us “With the launch of the 85” Plasma, Panasonic is continuing to lead the market in Europe for large format display with the most complete range of products to suit all applications,”

We doubt also at this price that “The introduction of larger than 80inch displays are attractive for digital signage networks offering images that match traditional 6 sheet poster sites and in attracting the attention of large outdoor players such as CBS and JCDecaux,” as stated by Chris McIntyre-Brown, Head of Professional IT & Imaging at FutureSource is going to be particularly accurate either.

This entry was posted on Monday, September 14th, 2009 at 11:06 @504 and is filed under Scuttlebut. You can follow any responses to this entry through the RSS 2.0 feed. You can leave a response, or trackback from your own site.