Wututu told us they will be at Total Media in Madrid and Quividi have made a big splash introducing version 3.0 of its audience measurement solution BUT to all intents and purposes their competitors seem to be dead and buried – at least in terms of PR or marketing.

We reckon that Trumedia have axed a lot of their staff – that or they are fed up of talking to us – yes, that is possible Ed and when was the last time we heard a squeak from CognoVision or Video Mining in our industry sector? 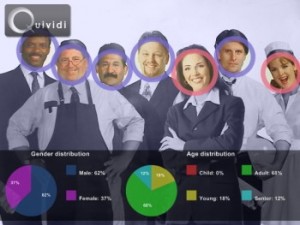 Anyway last week Quividi announced that it has just released version 3.0 of its audience measurement solution.

Quividi’s new release builds on the strength of the existing solution and adds major new features so we are told.

The new version of VidiReports for example adds in several key improvements ‘under the hood’ as well as: –

Vidicenter which aims to make it simpler to collect the anonymous audience statistics produced by all VidiReports instances and then to visualize the data into custom charts is improved by a new Flash-based graphic rendering module, with over 300 different chart types (this includes the possibility to create calendar average charts and to display multiple series per chart).

It also allows the import of media playlists and to cross reference playtimings with audience records in order to rank media audience volume (i.e. “how many people saw this particular clip?”

It also has a richer management console, to finely monitor all VidiReports instances and visually represent control and status messages.

New and existing customers can we are told immediately download VidiReports 3.0 from Quividi’s extranet and smoothly upgrade their installations as a part of the free upgrade service offered by Quividi.

Quividi is a privately held company created in July 2006 in Paris, France. Quividi’s vision is to develop affordable and effective audience measurement solution for out-of-home media. Relying on fast, proprietary image processing technologies, Quividi’s software accurately measures and qualifies the audience of any communication support in public places; real-time analysis allows the medium to adapt its content to the instantaneous audience profile and position. Quividi actively collaborates with all the players involved in retail marketing, from brands to screen network operators, from integrators to media agencies and research companies, with the goal to make Digital Out Of Home as accountable and targetable as the Internet.

This entry was posted on Friday, October 9th, 2009 at 13:46 @615 and is filed under Scuttlebut. You can follow any responses to this entry through the RSS 2.0 feed. You can leave a response, or trackback from your own site.