… and now its happening in cities throughout the U.K. so look out for Space Hoppers in a street near you. 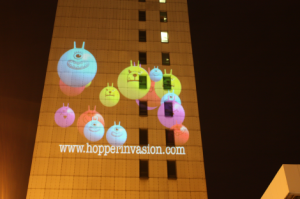 It’s all in aid of Sony Ericsson in a campaign in the UK booked by Mec Global via Kinetic.

The Street Hoppers were supplied by Iris-Experience.

Several of the projections targeted specific events in the evenings where a large gathering of people could be guaranteed, such as locations next to the O2 ABC in Glasgow and Academy in Birmingham on the nights of major acts.

This entry was posted on Thursday, October 8th, 2009 at 07:32 @355 and is filed under DailyDOOH Update. You can follow any responses to this entry through the RSS 2.0 feed. You can leave a response, or trackback from your own site.