Yes it was a win win for Titan and the UK Public as a tie up in Trafalgar Square allowed the UK populace who couldn’t (or didn’t want to) get home in time to watch the live tea time (GMT) FIFA World Cup Draw. 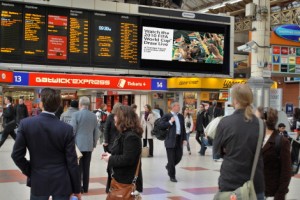 For those of you don’t follow ‘soccer’ – or handball as it is now called in France, Ed the live FIFA World Cup draw took place list night (Friday 4th December 2009).

It was great to see the draw broadcast via a large 46 metre screen in Trafalgar Square to thousands of people waiting in anticipation of the draw’s outcome and Titan getting involved with their Transvision network as well.

As part of Titan Outdoor’s World Cup 2010 advertising drive they have joined forces with Brand Influence, giving a unique tie-in that supports the South African Diski Dance which was shown at the UK screening of the FIFA World Cup draw.

The Diski Dance, formed from a series of choreographed football moves, is now being used by South African Tourism to generate excitement all over the world around next years tournament.

Video footage was shown on the large screen as well as a live demonstration prior to the draws commencement.

Yoko De Souza, Titan’s Business Development Director told us “We are proud to be supporting the Diski Dance. As pioneers of digital, delivering huge central London audiences, the combination of Titan Transvision and the giant screen at Trafalgar Square creates the perfect platform to generate excitement around the event and kick off our world cup media opportunities.”

Titan’s 10 Transvision screens in London termini stations featured a 20 second creative, running throughout the day, to drive awareness of the event.

This activity kicked off Titan’s World Cup out-of-home advertising opportunities for advertisers to capitalise on the fever around next year’s football tournament.

This entry was posted on Friday, December 4th, 2009 at 16:45 @739 and is filed under DailyDOOH Update. You can follow any responses to this entry through the RSS 2.0 feed. You can leave a response, or trackback from your own site.