Nobody Expects The Spanish Acquisition

I have certainly seen this before. Back in the 1990s when I was living in Madrid, I saw Banco Santander merge with —or rather acquire— first Banesto then Banco Central Hispano (itself the product of a prior merger) to become Santander Central Hispano. That didn’t last long, and Santander’s strong brand ended up obliterating any trace of the merged entities.

Now Mr Botín is at it again. It was not long ago that Santander acquired Abbey National, then proceeded to snap up Bradford and Bingley Building Society in the credit crunch sales. For a while, the smaller fish retained their names after being eaten, albeit with strong Santader-themed style. Not for much longer. This week the corporate overlords started a re-branding exercise for all 1,504 branches across the UK that will see the name “Santander” displayed all over British High Streets.

The advertising campaign features the Formula One World Champion 2008 Lewis Hamilton, building big signs with messages such as “Hello” and “No fees” using Santander-red building blocks, part of the introduction to the new brand. 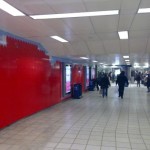 Screens against red background leading to the ticket hall 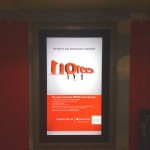 Six-sheet with the “No fees” in construction 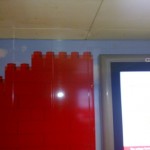 The pictures come from Euston National Rail Station, where the Titan Outdoor screens stand out against a red wall mural. The campaign can also be seen on CBS Outdoor’s screens in Tube stations such as London Bridge, provided one turns a blind eye to the row of blank screens (whoever came up with the idea of daisy-chaining them in fours should be birched).

This entry was posted on Tuesday, January 12th, 2010 at 23:00 @000 and is filed under DailyDOOH Update. You can follow any responses to this entry through the RSS 2.0 feed. You can leave a response, or trackback from your own site.