Typical male story, you break up with your girlfriend and then to get over it you end up living on your own in a studio with a television, bed, rug, toilet and the obligatory 131 bottles of pink nail polish. 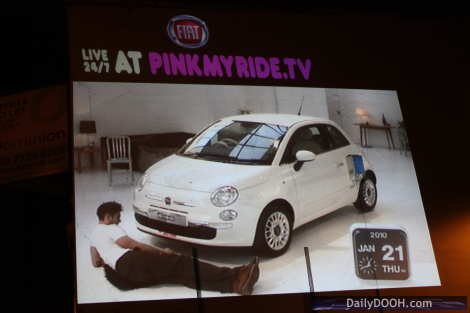 What on earth did David Sheath, a 28 year old who recently broke up with his girlfriend do with 131 bottles of pink nail polish? – err, did we mention a Fiat 500 car as well, Ed?

David gave himself the task of painting the Fiat 500 with the pink nail polish. The task took him 4 days and a number of cameras filmed him throughout the painting process. 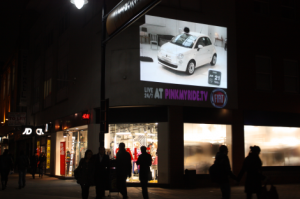 The Ministry of Experience have been digitally projecting time lapsed footage of the ‘event’ on a variety of sites in London.

The event has event been put forward as a Guinness World Record attempt for the longest on-line advert.

The event was also broadcast live on www.pinkmyride.tv

This entry was posted on Wednesday, January 27th, 2010 at 09:04 @419 and is filed under DailyDOOH Update. You can follow any responses to this entry through the RSS 2.0 feed. You can leave a response, or trackback from your own site.