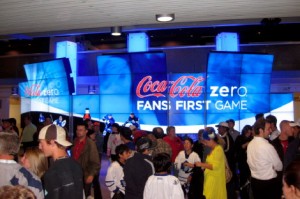 and execution of one of the most sophisticated digital screen networks in the sports facility world, at Toronto’s Air Canada Centre, (see our Sept. 10, 2009 article) has earned digital signage consultancy Digital Display & Communications a 2010 awards nomination at the digital signage industry’s largest event in North America.

Digital Signage Expo announced nominations on Jan. 28, across eight categories, for excellence in specific elements of the fast emerging industry.

DDC was cited, along with its chosen software supplier Omnivex Corp., for its comprehensive work on the $3 million installation, switched on for fans of the Toronto Maples Leafs and Toronto Raptors in fall, 2009. The project was built around a media communications plan that saw the fan experience dramatically enhanced, sponsor messaging opportunities boosted and a media sales plan developed that is expected to allow the building owner, Maple Leaf Sports and Entertainment, recover its investment in approximately two years.

The screen network – now with more than 320 HD-quality video display monitors installed in a wide variety of configurations – was part of a massive $50 million facelift to the landmark facility, which is among the five busiest sports and events centers in the world.

Gold, Silver and Bronze awards will be presented in each category at the APEX Awards, with DDC and Omnivex finalists in the Sports Facilities category with a couple of technology giants: Cisco Systems for work wth Miami Dolphins/Land Shark Stadium (now Sun Life Stadium); and Sony Electronics for American Airlines Arena, also in Miami.

Other nominees in their categories include:

The winners will be announced Feb. 24 at a banquet in Las Vegas, during the DSE trade show.

This entry was posted on Friday, January 29th, 2010 at 19:00 @834 and is filed under Scuttlebut. You can follow any responses to this entry through the RSS 2.0 feed. You can leave a response, or trackback from your own site.