CBS Outdoor, on behalf of client Visa, is running what is believed to be the first out-of-home high definition 3D projection advertising campaign.

The campaign’s creative is by TBWA\Chiat\Day and media by OMD, both out of their Los Angeles offices.

CBS Outdoor teamed up with N4D, Suwanee, Georgia (US), to develop this 3D digital campaign. The centerpiece of the campaign is a 14’ screen displaying commercials in 3D. The physiologically correct 3D content created by N4D is a first in digital outdoor advertising and is expected to lead the way for this type of application. 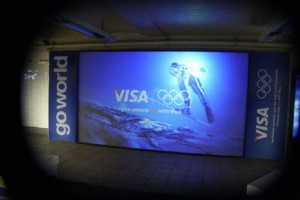 definition 3D content to a high profile location like Grand Central Station, we needed a partner with the experience and resources to meet our clients’ needs,” says David Lane, vice-president, digital media, for CBS Outdoor. “Our partner N4D created a custom 3D solution that exceeded our expectations and their team overcame every challenge we presented to them. We look forward to a continued expansion of our 3D offering with N4D.” 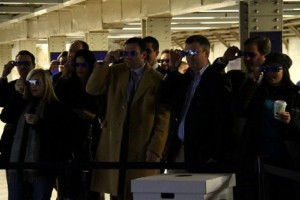 Using state of the art 3D technology and a custom theatre-like environment created exclusively for this campaign, consumers can see 3D commercial spots, with audio. Brand ambassadors (street teams) distribute special 3D glasses to the 70,000 commuters that pass by the display every day. The commuters can keep the glasses for other 3D use in the future.

“The MTA (Metropolitan Transportation Authority) asked us not to show the 3D commercial at the to-and-from work times, because it was concerned that with so much traffic at rush hours, it could be a safety hazard,” says Lane. “So we chose the third-busiest time.”

With this, CBS Outdoor is demonstrating how clients can use already produced television advertisements and convert them into a captivating 3D version that brings the commercial to life.

Another first for Grand Central Station is the use of 3D dioramas placed throughout the Shuttle passageway where the projection screen is located. The 3D dioramas appear dimensional to the naked eye, giving the impression one can see around certain elements of the creative.

The campaign, which will run the entire month of February, includes more than 100 pieces of client media pieces throughout the station.

Lane says that the ‘Go World’ high definition 3D commercial will create a one-of-a-kind brand experience and a show-stopping moment for millions of commuters.

“Working with CBS Outdoor is a tremendous opportunity for N4D,” said Clif Parker, CEO of N4D. “Their best-in-class campaigns and willingness to innovate at the leading edge of outdoor advertising are a perfect match for N4D. We look forward to building a strong, long term partnership with CBS Outdoor and together pushing the boundaries of what digital outdoor advertising can become.

“N4D’s goal is to change the way the world views information. N4D’s 20 years of research offer a new paradigm – 3D for extended daily use. This 3D technology provides CBS Outdoor with a definite edge in the signage industry.”

This entry was posted on Monday, February 8th, 2010 at 07:32 @355 and is filed under DailyDOOH Update. You can follow any responses to this entry through the RSS 2.0 feed. You can leave a response, or trackback from your own site.