Did you know that we had a sister site DailyDOOH.asia that covers China, Taiwan, Korea and Japan? And that it is more often than not, written in local language? 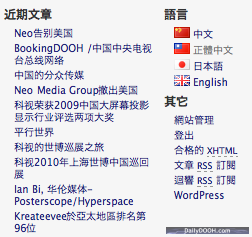 It’s actually our first site that has multi-language capability built in – meaning that it handles a single post written in several languages.

Support is already there for simplified Chinese, traditional Chinese, English and Japanese.

In the last few months the largest number of visitors have been from Shanghai and Beijing in Chinese language followed by London, followed by San-Ch’Ung in Taiwanese, followed by Hong Kong (not surprisingly actually) in English.

This entry was posted on Friday, February 26th, 2010 at 10:35 @483 and is filed under DailyDOOH Update. You can follow any responses to this entry through the RSS 2.0 feed. You can leave a response, or trackback from your own site.