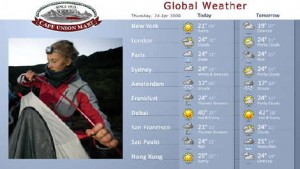 How does global weather help sells?

Recognizing the advantages of communicating with customers at the point of purchase, Adventure Centres’ digital signage network consists of separate channels of LCD screens that are used to communicate product information and special offers at various locations in the store.

A row of 37” screens at cash points shows a mixed programme of special offers and short product videos. Larger 50” screens in the stores display product videos that demonstrate the features and advantages of equipment that is sold in that section. Cape Union Mart operates and monitors the media network from its head office in Cape Town using Isenzo Mediacaster.

Cape Union Mart has also extended the media network to its outlet at OR Tambo International Airport in Johannesburg. Here, a large LCD is split into two zones; the first zone displays an up-to-date weather forecast for 10 international cities, typical destinations for travellers at the airport. The second zone displays advertising for all-weather gear that travellers can purchase in the store.

Isenzo is a technology company, based in Cape Town, South Africa, that develops robust and cost-effective multimedia broadcast solutions for the corporate, retail and leisure industries. Its Mediacaster simplifies the creation and management of digital media networks, allowing users to quickly create and run a variety of channels such as Digital Signage, Retail Television, Out-of-Home Networks, Corporate Channels and Multimedia Info Displays.

This entry was posted on Wednesday, March 10th, 2010 at 07:30 @354 and is filed under DailyDOOH Update. You can follow any responses to this entry through the RSS 2.0 feed. You can leave a response, or trackback from your own site.