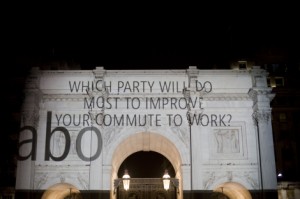 Marble Arch, the Royal Festival Hall and the National Theatre were all London landmarks on Tuesday night, chosen for a series of projections to promote Microsoft’s search engine Bing.com

On the day that the British Prime Minister Gordon Brown announced the general election date (6th May 2010 which of course conflicts with #ScreenMediaExpo) Bing.com ran an incredibly quick reactive campaign described thus “Bing.com helps the nation to make an informed decision as Gordon Brown announces date for the General Election”

This entry was posted on Wednesday, April 7th, 2010 at 15:52 @703 and is filed under DailyDOOH Update. You can follow any responses to this entry through the RSS 2.0 feed. You can leave a response, or trackback from your own site.