Visit A Hospital, Rent A Laptop

Connectivision, based in El Dorado Hills, California, has been going all out to place its Connectimed products in hospitals and medical centres since launching six months ago.

The company has a goal 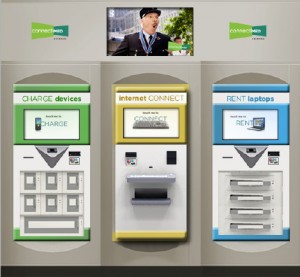 of 80 hospitals installed by Q4, 2010, and already in between 10 and 20 hospital and medical centres in the southern, central and eastern U.S. hold its interactive connectivity stations in their entries, business and common areas.

And that’s in addition to a separate network of HD LCD screens in doctors offices and clinics, as well as hospital waiting rooms and cafeterias.

Connectivision began life as Powerport in airports four years ago, and many of the same features of its interactive connectivity centres seen in airports have been incorporated into its Connectimed network. (The airport division now operates as Connectiport.)

The interactive connectivity centres combine digital screens along with the ability to recharge cell phones, rent (Dell) laptops, connect to the Internet, and print, all in one centre. Digital screens carry advertising and sponsored content, with all medical information vetted by a physicians’ advisory board. The system allows staff, patients and visitors to stay connected with the outside world. 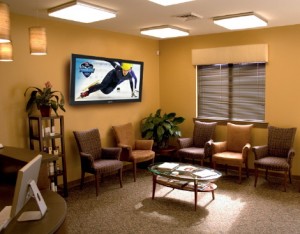 And, in addition to general networks, the company offers a specialized network for orthopaedic surgeons’ offices.

This entry was posted on Wednesday, April 14th, 2010 at 08:01 @376 and is filed under Scuttlebut. You can follow any responses to this entry through the RSS 2.0 feed. You can leave a response, or trackback from your own site.