The Colbert Report lately you’ve been seeing what was the first example of a Christie MicroTiles installation after the product’s launch in Nov./09.

You might remember that DailyDOOH broke the story when it recognized Christie’s MicroTiles on The Colbert Report’s Jan. 4 season premiere. On that show, Stephen Colbert introduced the redesign of his new Red, White and Blue set featuring Christie MicroTiles.

The breakthrough modular display technology debuted in a bolder-than-HiDef-way for Comedy Central’s most daring pundit. The redesigned stage features 41 MicroTiles arranged as three horizontal displays, in 1×4, 1×5 and 1×4 arrays underneath Colbert’s desk; and four angled 1×7 vertical columns along the backdrop. The tiles display high definition video and graphics created exclusively for the show.

“The best part about being the first show to use the Christie MicroTiles is that we are the first,” says Meredith Bennett, co-executive producer, The Colbert Report. “We love being first.”

The people involved with the set build have strong, positive opinions about the product, according to a release at NAB in Las Vegas yesterday. 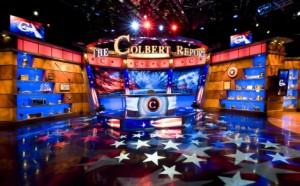 Videofilm Systems Inc., Bridgeport, Connecticut, collaborated with Emmy-Award winning design firm Jack Morton to specify and install the Christie MicroTiles for The Colbert Report. Dale Cihi, engineering designer at Videofilm says, “After Giselle Vogel, our vice-president, and I saw the MicroTiles demo at InfoComm ’09, we were taken by the technology and knew we had to include it on the set of The Colbert Report. Real-time color correction and off-access viewing were the primary requirements we had to overcome and Christie MicroTiles definitely met the criteria. It’s the kind of product that sells itself once you see it. It definitely has the ‘wow’ factor.”

“We found that in updating the set, the brightness factor was crucial and we really wanted to include strips of video into the redesign,” says Jim Fenhagen, senior vice-president of design at Jack Morton and chief designer of The Colbert Report set, commenting on Christie MicroTiles’ unique combination of DLP with LED illumination. “The set had to be amplified visually without being too distracting, while still maintaining its unique signature on air. Christie MicroTiles were perfect. They fit seamlessly into the existing space while providing the best color matched graphics and video, without any pixelation.”

“In creating the MicroTiles, Christie implemented all my favorite technologies,” says Chi. “I would have chosen the same screen, housing unit, light engine, optics and 4×3 aspect ratio. It’s the kind of all-in-one technology you dream of. Given this was the first time the technology was going to appear on air, we received phenomenal support from Christie’s after-sales team. Not only is the product so well designed and easily implemented, knowing that Christie stands by its product made us feel very comfortable with using it right out of the box.

“We are building ‘green’ into our solutions more often. With Christie MicroTiles, our installs use less electricity and operate longer with lower cost of ownership. This is as close to ‘set-it-and-forget-it’ technology as you can get.”

Fenhagen says that set design is a very competitive business and to stay on top you have to find creative and renewable ways to use the technology you have – and MicroTiles innovative media easily adapts for entertainment spaces.

“We can stack them the way we want and repurpose them later to create a totally new design,” says Fenhagen, “The ease in which the tiles went in was also very accommodating: we didn’t have to redo the existing columns.”

Christie MicroTiles is bringing a new era to broadcast sets, since their narrow profile can fit even the most space constrained studios.

“The possibilities are endless in terms of what they can do,” says Mitch Rosenberg, director of sales, Visual Environments Display Systems at Christie. “The added advantage is that HiDef cameras love MicroTiles. They achieve 115% NTSC broadcast standard and PAL color gamut – no other display can do this. MicroTiles have an amazing visual impact and are fun to work with…it’s as easy as…design, lock and play.”

This entry was posted on Tuesday, April 13th, 2010 at 07:00 @333 and is filed under DailyDOOH Update. You can follow any responses to this entry through the RSS 2.0 feed. You can leave a response, or trackback from your own site.