Christie Digital, a global leader in visual solutions for business, entertainment and industry, is launching its new digital canvas Christie MicroTiles across Asia, initially in Japan today (April 22) and scheduled to travel across South Korea and China – as well as Australia.

As mentioned in several earlier articles on DailyDOOH, MicroTiles is Christie’s innovative digital display technology that creates a virtually seamless digital canvas and offers spectacular, crisp visuals at any distance. The modular digital display tiles can be stacked and clustered like building blocks to create display walls of any shape or scale, using an entirely new, advanced optical design that produces unparalleled levels of brightness, contrast and color reproduction – greater than 115% NTSC and PAL color gamut. 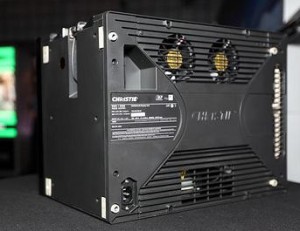 With a screen size of 16 inches (408mm) wide x 12 inches (306mm) high, the tiles also feature a shallow depth of only 10 inches (260mm) and require just 2 inches (50mm) of minimal clearance for rear ventilation. Christie engineers designed the MicroTiles to be fully and easily serviced from the front. The tiles are ‘self-aware’ – meaning that time-consuming and costly color calibration needed to keep conventional video walls looking uniform, is automatically completed by the sensors built into the MicroTiles.

Both advertising and retail signage content will be featured at the Asian launch of Christie MicroTiles in a variety of configurations, including: an 8×6 media wall, the Big ‘O’ retail signage display, two columns in a 1 wide x 5 high configuration, a vertical panorama (1 high x 6 long) array, a 3×6 media wall and the ‘Skyscraper’ consisting of 14 tiles in an irregular shape.

“The MicroTiles launch represents Christie’s distinct revolution in display technology globally,” says Mamoru Hanzawa, general manager, Japan. “More than 100 tiles are used at this launch and we are proud to showcase the possibilities of this innovative display technology.”

Jack Kline, president and COO, Christie USA, says, “It is a significant event for us to debut Christie MicroTiles to our customers and partners in this market. The Asia Pacific market demands high quality, high resolution displays and MicroTiles is designed to address these requirements.”

The spectacular image quality and modular flexibility of the MicroTiles system opens up wide possibilities for companies charged with designing and creating large, vivid visual displays for architectural installations, digital out-of-home, event centers, command and control facilities and retail environments. Christie MicroTiles can easily be incorporated to fit within the physical constraints of a building and eliminate the compromises made when using other display technologies.

Known around the globe for high quality digital projection systems, Christie had its new tiles in R&D for two years at Christie Digital Systems Canada, Kitchener. The product launched in North America in late 2009, and has been seen by millions on The Colbert Report television set.

Technology and visual design experts who have seen the display have described the system as ‘one of the wonders of the world in displays.’

This entry was posted on Thursday, April 22nd, 2010 at 18:36 @817 and is filed under DailyDOOH Update. You can follow any responses to this entry through the RSS 2.0 feed. You can leave a response, or trackback from your own site.