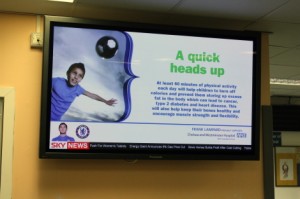 Over 'ere mate on me 'ead

There appear to be similar screens in the Royal Brompton and Great Ormond street hospitals as well and we hear (from a very pissed off competitor) of several others being lined up in the next couple of months.

It’s likely that the Healthcare Messaging Group will have deployments in around 15 London hospitals this year and there appear to be plans for a wider UK rollout next.

“Apprentice winner Yasmina Siadatan has secured her first major deal in her new job” was how, back in October 2009 the ‘Great Ormond Street Appoints Amscreen‘ deal was touted. We heard differently and that it was Sir Alan Sugar (now Lord Sugar) who got his (Amscreen) unit in on the 13th floor through a consultant friend (note: hat’s off to Lord Sugar whom has long been a generous supporter of Great Ormond Street children’s hospital) and it will be interesting to see if the contract that we believe HMG has with the trust means that Amscreen have to pull theirs out.

This entry was posted on Sunday, May 2nd, 2010 at 12:53 @579 and is filed under DailyDOOH Update. You can follow any responses to this entry through the RSS 2.0 feed. You can leave a response, or trackback from your own site.