OVAB Europe kicked off its industry representation at #ScreenMediaExpo the evening before the event proper with one of its exclusive Supper Club’s in London. 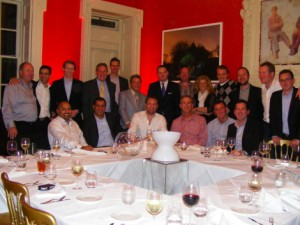 Rumour was that following on from Adrian’s diatribe ‘#ScreenMediaExpo – Heroes And Zeroes‘ over the weekend (he was still on a roll apparently) his toast to those assembled at the OVAB Europe Supper Club on Tuesday evening was “Champagne for our real friends and real pain for our sham friends!” – true? Well no-one we spoke to is saying!

I wasn’t invited to the OVAB Europe Supper Club (it’s very exclusive and only open to CxO’s, media owners and ‘captains of industry’ apparently) but I am told by those who attended that it was an excellent event; good food, great company much drinking of wine and all in all a superb networking opportunity.

The event was held at the private members club Quintessentially Soho, at the house of St Barnabas.

The next Supper Club is almost definitely being held in Germany; either in October before the next OVAB Conference or in November the evening before Viscom Frankfurt.

This entry was posted on Wednesday, May 5th, 2010 at 02:24 @142 and is filed under DailyDOOH Update. You can follow any responses to this entry through the RSS 2.0 feed. You can leave a response, or trackback from your own site.