And Pigs May Fly…

Today the UK population head to the polls for a General Election to decide who should lead the country for the next 5 years and this evening Projection Advertising will attempt Battersea power station’s most impressive projection to date – basically twin, 3D mapped projections will be place onto both of the famous north towers and chimneys using their (relatively new) video-mapping technology AdTrace. 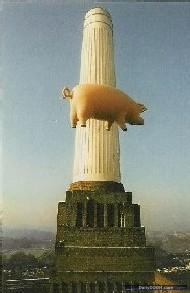 The projections will also feature live on Sky News from 21:00 through to 05:00 as part of Sky’s (over night) election night coverage.

The AdTrace projections will feature 3D visual effects illustrating incoming results live as they come in as well as the predicted results from the exit polls.

Projection Advertising will also turn each of the front towers in to the door of 10 Downing Street which will swing open to reveal the leader of the country.

Sky have taken the concept of 3D mapping and run with it for their coverage of the 2010 election but it is a medium so versatile that it can be used as a centre piece of any big event, marketing campaign or television programme.

We will have more photos on Friday.

This entry was posted on Thursday, May 6th, 2010 at 00:01 @043 and is filed under DailyDOOH Update. You can follow any responses to this entry through the RSS 2.0 feed. You can leave a response, or trackback from your own site.