Vasco Travel, a network of travel agencies with offices throughout Quebec, and in Toronto and Hamilton in Ontario, has made a deal with Hudson’s Bay Company that sees Vasco outlets opening in Zellers stores across Canada.

The company has included digital signage as part of its new turn-key franchise package, with Montreal-based Mirada Media chosen to provide the technological platform, setup and network management of the signage architecture. 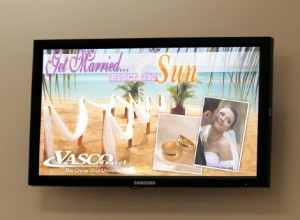 specialize in cruises, packages, and tours. The new Vasco-Zellers outlets are being outfitted with two 40” commercial-grade HD LCD panels, one at each side of the entrance to the agency, each powered by Mirada Media’s ChannelView player. The distribution of content is being done via Mirada Media’s head office in Montreal.

“As a technology leader in the travel industry, digital displays were a logical response to an extensive advertising campaign orchestrated in affiliation with HBC,” says Guillaume Racine, director of technology at the Atrium Group, Vasco’s parent company. “We had to be innovative and make a big splash in all our branches, which was possible with digital signage.”

Branded as Vasco TV, the network has several roles: to feature a variety of videos and images to attract shoppers to the agency; inform them of the latest vacation deals; promote Vasco’s participation in the HBC Prime Points loyalty program and Deferred Payment Plans; and display advertising from preferred suppliers. Dynamic content, such as vacation hot-spot weather feeds, is also being shown to entice shoppers into booking the vacation of their dreams.

“Our agencies and their customers love our new screens,” says Racine. “For them, it is a colorful and innovative way to attract the eyes of their customers in the highly charged environment of a department store. Moreover, the flexibility of content display immediately attracted our partners, who see digital signage as a novel and professional approach to promotion.”

The first Vasco-Zellers outlets were opened in Quebec and Ontario, where Zellers has 56- and 105-store footprints, respectively. Vasco Travel’s three-phase expansion will continue into 2012, at which point they will be in 80% of Zellers stores across Canada. The Atrium Group, Vasco Travel’s parent company, has more than 160 travel agencies under various banners in seven provinces across Canada. It also plans to bring digital signage to other agencies under Atrium in the near future.

This entry was posted on Wednesday, May 26th, 2010 at 08:42 @404 and is filed under Scuttlebut. You can follow any responses to this entry through the RSS 2.0 feed. You can leave a response, or trackback from your own site.