We think these event organisers are cheeky buggers for (a) daring to label the event ‘Digital Signage’ (the exhibition is clearly 85% kiosk) and (b) having the guts to call it an ‘Expo’ but have you noticed how Digital Signage Expo 2010 has dropped the ‘Europe’ tag recently? 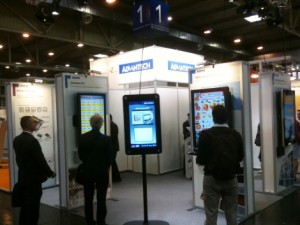 Our spies who did go have told us that “the conferences are interesting but the show is very very quiet”, mind you several others decided at the last minute not to go, one told us this morning “I waited til’ the last minute then saw the exhibitor list was rubbish and decided against it”

We have so far heard very good things about Steven Platt’s PRI open forum program which is taking place at the event – some we spoke to even went as far as to say “it’s better then the Munich conference and for free”, mind you there is still a mixed audience – sometimes standing room only in the aisles but then sometimes as little as 10 people.

Steven Platt we are told doesn’t look real happy but then we warned him much earlier in the year when he told us he was planning this – anyway let’s hope he is getting well paid for his efforts.

It’s hard to gauge whether Florian and Oliver over at Invidis are entirely positive or not either, yesterday they wrote ‘Gute Stimmung in Essen‘ where rather than going out of their way to say whether the event is any good or not (plainly the show is a complete waste of time and has no place being on the industry calendar) they say (our translation and our paraphrasing) “A good mood from the exhibitors is important … as the largest market for digital signage products Germany needs its own event … It would be a shame if we would have to completely leave this territory to European neighbors”

Jens Schindler and co. based down in Cambridge, England who organise the event are obviously now pitching this purely as a German event.

This entry was posted on Wednesday, June 16th, 2010 at 09:43 @446 and is filed under DailyDOOH Update. You can follow any responses to this entry through the RSS 2.0 feed. You can leave a response, or trackback from your own site.