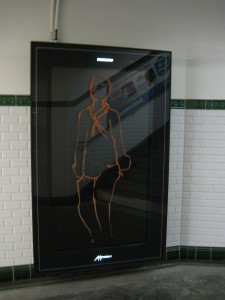 At first glance this could pass for a piece of art on one of the digital screens on the Paris Metro but look again and you will that it’s not that at all. It is actually graffiti and most probably put there by one of the five anti-advertising associations with wonderfully evocative names (Smile, You’re Being Filmed, Big Brother Awards, Resistance Against Advertising Aggression, Robin Hood of the Roofs and the Ad-Phobe) that seemed to have cropped up in Paris over the last few years.

Meaning ‘No To Advertising’ the slogan ‘No Pub’ (it has nothing to do with beer either) is unfortunately commonly seen daubed around Paris these days.

Russ Curry, our Paris correspondent takes a more detailed look at the extent of vandalism on the Paris metro on Tuesday.

This entry was posted on Monday, June 21st, 2010 at 10:29 @478 and is filed under Scuttlebut. You can follow any responses to this entry through the RSS 2.0 feed. You can leave a response, or trackback from your own site.