Time Out New York (TONY) Kids has launched what is believed to be the world`s first-ever magazine cover to be enhanced by mobile augmented reality. 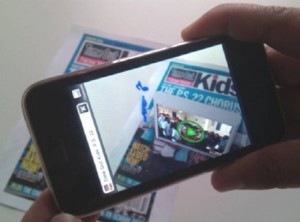 The TONY Kids’ August issue will actually sing from the newsstands for anyone with a Smart Phone. The user can simply point a Smart Phone at the magazine cover and enjoy a video of P.S. 22, the Webby Award-winning fifth-grade chorus from Staten Island, which has found national fame on YouTube. All you need is to activate the TONY Kids P.S. 22 channel on the free junaio browser.

junaio was launched last Nov., 2009, as a new product of Metaio, the seven-year-old company headquartered in Munich with offices in San Francisco and Seoul. While junaio has been used once before with Popular Science magazine involving an online campaign, the venture with Time out New York is totally different.

Time Out is pioneering q new way of letting readers enjoy the magazine, by exploiting the latest advances in augmented reality technology to unlock video and 3D content at the click of a smartphone.

Gracing the magazine cover is the popular, Webby Award-winning P.S. 22 Chorus, whose YouTube performance has garnered more than 19 million views. The fifth-graders have enjoyed extensive media attention since clips went viral-videos of the elementary school chorus rocking out to contemporary hits by Lady Gaga, Alicia Keys and Rihanna.

Readers can download the free junaio app onto their smart phones from the App Store or Android Marketplace. Once the app is downloaded, users simply hold their smartphones up to TONY Kids` special cover and a video of the chorus performing One Day by Matisyahu will play, introducing readers to the chorus before they even open the issue.

“Augmented reality, in its simplest form, allows consumers to use their mobile devices to experience print products in a new and exciting way,” says Marci Weisler, digital business director of Time Out North America. “An image that was once static on a page now comes to life – one that allows readers to see and hear the content for themselves.”

Elizabeth Barr, editorial director, Time Out North America, says, “Time Out is always looking for ways in which our readers can engage creatively with our product, so creating a cover that plays with augmented reality was a no-brainer. It reflects the spirit of fun that TONY Kids seeks to create on a monthly basis. The cover literally sings to our readers, allowing them to experience firsthand why our editorial team chose to feature the talented students of the P.S. 22 Chorus in the first place.”

Time Out New York Kids is known by discerning, active parents as the go-to guide for where to go and what to do with their family in the city. The monthly magazine is available through subscriptions and newsstand sales in the New York City area. It has a monthly distribution of 55,937 and claims a weekly readership of 117,468.

This entry was posted on Tuesday, July 27th, 2010 at 00:15 @052 and is filed under DailyDOOH Update. You can follow any responses to this entry through the RSS 2.0 feed. You can leave a response, or trackback from your own site.