You are going to have to wait until 2014 for Phoenix Island to be complete but Daktronics tell us that by the end of this year the installation of a multi-million dollar Daktronics LED display system is set to be complete. 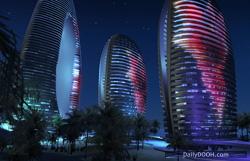 Approximately 33,0000 linear meters (108,000 feet) of ProPixel® LED stick elements will be installed on the outside of the buildings – the owner of the island envisioned covering every building on the island with top quality LEDs!!

Working with Daktronics from the very early concept stages, the curtain-wall on the outside of each building was specifically designed to house the Daktronics LED stick elements. The specially designed exterior will allow for a sleeker, continuous look, without the appearance of add-on features and should look amazing.

Jon Minor, Daktronics (Shanghai) Sales Director told us “Early involvement in the design process allowed us to bring our experience in this type of application to the customer’s project team. Our willingness to support the customer’s design needs combined with an unparalleled product positioned Daktronics as the company of choice for the owner in his effort to create a globally recognized luxury facility.”

Jon Settingsgard, Daktronics Product Manager told us that “ProPixel® technology was designed specifically for large scale, multi-building applications such as this,”

He added “Phoenix Island will become a global landmark, and our stick elements will help get it there.”

This entry was posted on Monday, August 9th, 2010 at 10:14 @468 and is filed under DailyDOOH Update. You can follow any responses to this entry through the RSS 2.0 feed. You can leave a response, or trackback from your own site.