The company will be 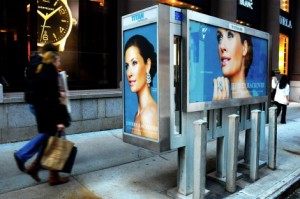 This latest transaction will triple the Company’s inventory of New York phone kiosk media to over 5,000 advertising faces. This purchase follows a prior acquisition of 652 payphones at 462 phone kiosk locations from Verizon in 2009 and will complete the sale of Verizon’s entire New York City phone kiosk advertising inventory to Titan.

With this acquisition, Titan will own the largest inventory of advertising Phone Kiosks in the five boroughs, enhancing its already strong presence in Manhattan. Titan will become the City of New York’s largest public pay telephone franchisee.

Telephone Kiosk advertising revenues proved resilient during the advertising downturn of 2008/9 and the Company is confident of sizeable growth in what remains of 2010 and beyond. In a more modest area of growth for the company, Titan even gets to collect the quarters from the phones!

“Kiosk advertising cannot be missed on the streets of New York,” sas Don Allman, Titan president and CEO. “The displays are seen by both pedestrians and drivers and enable clients to target audiences and retail locations with pinpoint accuracy. In many key areas of the city, Titan phone kiosks are the only available media.”

Titan is the only New York sales company to offer full wrapped kiosks and will be developing more creative and technological solutions for the media.

Jamie Lowe, Titan executive vice-president and head of national sales, says that in addition to the increased inventory for clients, the company will also continue to bring innovation to the phone kiosks.

This entry was posted on Friday, August 20th, 2010 at 07:07 @338 and is filed under DailyDOOH Update. You can follow any responses to this entry through the RSS 2.0 feed. You can leave a response, or trackback from your own site.