Guinness ‘Pour Your Own Pint’ Experience

Arthur Guinness, inventor of the world’s best beverage, died in 1803. He is supposed to be buried near to his birthplace in Celbridge, in a small country graveyard at Oughterard, Co. Kildare, Ireland, which has recently become a Mecca for adventurous tourists inspired by Guinness’s “Arthur’s Day” campaign.

But I’m not convinced – I think that I found him back, alive and well, despite being trapped inside an oil portrait of himself in a pub in Sligo, Eire while I was there on holiday recently. 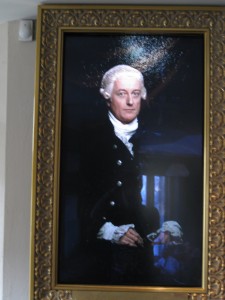 I was admiring a reproduction oil portrait of the famous man when he winked at me. I know it was a reproduction because you wouldn’t put the original in a pub. Yes, he did, he winked at me then he offered me a cigar from his inside pocket, tried to light it from an off-painting candle, and when it failed to light, he put the cigar away again and resigned himself to being a slightly bored portrait again. Now this was at lunch-time and I hadn’t yet touched a drop of his stuff, so I know that it really did happen.

So I stood there in front of him and waved, jumped up and down and walked past him a few times to try to attract his attention again, but he just ignored me. I sat down and started to enjoy my first pint of the day, when out of the corner of my eye, I saw that he was off again, pulling new tricks on dumbfounded passers-by.

That’s when I realised that it wasn’t really Arthur himself trapped inside an oil-painting, but a digital screen portrait with video vignettes timed to go off every ten minutes or so to entertain us.

It turns out that the portrait is part of what Guinness call the ‘Pour Your Own Pint‘ experience and the first installation dates back to  June 2007 .

Claire Cadogan, Marketing Manager, GUINNESS in Dublin told me “We now have over 200 bars across the country with PYOP tables, many of which have Arthur’s Portrait. PYOP tables are high bar tables with their own Guinness and Carlsberg taps installed.   It is a unique opportunity for our customers to learn the famous two-part pour and experience the Guinness settling ritual for themselves”.

“The Guinness pint pouring ritual is an experience that is much loved amongst our consumers.  The interactive Pour Your Own Pint experience allows customers to learn how to pour a pint at their very own serving tables. Arthur’s Portrait is always positioned within view of the tables to add more theatre and entertainment to the night. As well as entertaining consumers on their night out, Arthur also coaches and informs customers watching the screen on how to pour the perfect pint of Guinness in a fun and engaging way.”

Asked about the possibility of additional sites, she added “We are reviewing the Pour Your Own Pint outlet list and adding new sites as and when the right opportunity presents itself. Also to mark Arthur’s Day this year in Dublin, we utilised Lightwalkers to project Arthur on the sides of a couple of key buildings as a new and fun part of our media activation.”

At present, the film is run via a DVD player and the company doesn’t have any plans to make it interactive or triggered by motion “but we are always open to new ideas/new ways of bringing the energy and personality of the Guinness brand to life for our drinkers” Claire told me.

This entry was posted on Wednesday, October 27th, 2010 at 20:58 @915 and is filed under DailyDOOH Update. You can follow any responses to this entry through the RSS 2.0 feed. You can leave a response, or trackback from your own site.

2 Responses to “Guinness ‘Pour Your Own Pint’ Experience”