Back in May we told you “SA Screen media have finally arrived in Norway … recent opening of a Norway office in association with Anders Krogh” and the first campaign as a result of that is a campaign for the Offshore North Sea 2010 Committee. 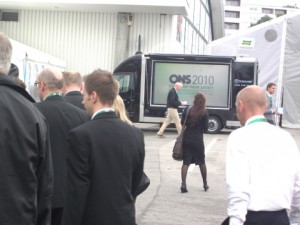 Last week saw digiadvans interact with 42,000 people from over 100 different countries – the digiadvan being used to communicate key messages on behalf of the ONS 2010 Committee at the Stavanger Conference Centre.

This campaign marks the launch of SA Screen Media Norway, with more campaigns already planned for the next few months.

The ONS is a huge exhibition in Norway with both the King and Prime Minister of Norway in attendance on the opening day.

This entry was posted on Monday, August 30th, 2010 at 10:32 @481 and is filed under Scuttlebut. You can follow any responses to this entry through the RSS 2.0 feed. You can leave a response, or trackback from your own site.