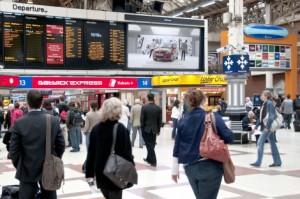 As part of the ‘Design for Life’ advertising campaign, the current Suzuki Swift TV commercial was recreated live at Westfield Shopping Centre – Alfa and Discoteck, two street-art illustrators reproduced their artwork on a giant canvas in front of shoppers.

Regular live updates were broadcast via 10 digital screens to thousands of commuters at nine stations, including Euston, Victoria and Waterloo. Throughout the day Transvision featured 20 second teasers to support the London activity as well as bespoke regional creative.

James Power, Head of IDEA at JCDecaux told us “This activity for Suzuki Swift is really exciting as it shows the capability of our digital screens to constantly push the boundaries, whilst offering advertisers innovative ways to bring their campaigns to life.”

This media first for Suzuki Swift was booked with JCDecaux through nexus|h and IPM and forms part of a wider campaign that also includes television, online and direct mail activity. Suzuki Swift ran a promotional event throughout the day at Westfield featuring a DJ and prize draws.

Susie Redfern, Account Director, IPM, commented “The Transvision network enables Suzuki to broadcast their interactive Westfield launch event to over 1 million London commuters in real time, as the events unfold – illustrating how niche communications can be amplified through digital OOH for maximum gain.”

This entry was posted on Wednesday, September 1st, 2010 at 07:43 @363 and is filed under DailyDOOH Update. You can follow any responses to this entry through the RSS 2.0 feed. You can leave a response, or trackback from your own site.