showed that approximately 62% of the national advertisers surveyed across 21 industries believed TV advertising had become less effective in the past two years alone, digital out-of-home networks like Akoo seem to be benefiting from this discontent.

Akoo recently launched TV ad campaigns for new clients including Microsoft Xbox 360, Verizon FiOS, Live Nation, Fox Television, and Universal’s Scott Pilgrim vs. the World movie trailer and soundtrack. It has also signed a wireless carrier and a pharmaceutical company, both of which will launch their TV campaigns in the coming weeks.

The campaigns follow the successful integration of TV ads on Akoo’s network over the past year. Independently conducted advertising effectiveness studies found that 30-second TV spots in an interactive programming environment often outperformed broadcast TV equivalents in brand metrics such as recall, consideration and purchase intent.

The new Akoo campaigns illustrate the network’s ability to reach high-value audiences away from home. Microsoft Xbox 360 is back on the network promoting its new controller-free gaming device Kinect, one of the game console’s most important product launches yet. Verizon is advertising its FiOS TV service, as it launches in new markets and competes against entrenched cable operators. Live Nation and Universal are connecting with Akoo music fans across the country, while Fox Television is promoting the new Craig Kilborn talk show in several major markets. The Kilborn File has a limited summer run on several Fox stations this summer and may be rolled out across the country next year. 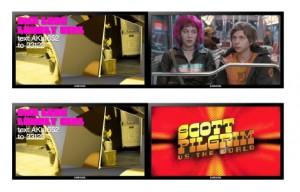 Akoo is available in 54 top markets in 30 states. Akoo programming and advertising is delivered on up to 20 big-screen HDTVs in retail and campus locations, deployed in pairs to obtain full coverage of each seating environment. A professional audio system monitors ambient noise and automatically optimizes volume to provide an immersive audio-visual entertainment experience.

This entry was posted on Thursday, September 2nd, 2010 at 08:01 @375 and is filed under DailyDOOH Update. You can follow any responses to this entry through the RSS 2.0 feed. You can leave a response, or trackback from your own site.