Many of the digital out of home start-ups we hear from are not well funded and we often wonder whether they will be able to make a go of it. The advertising revenues of course rarely come in as rapidly as one expects and we’ve seen many ambitious plans struggle and fail. 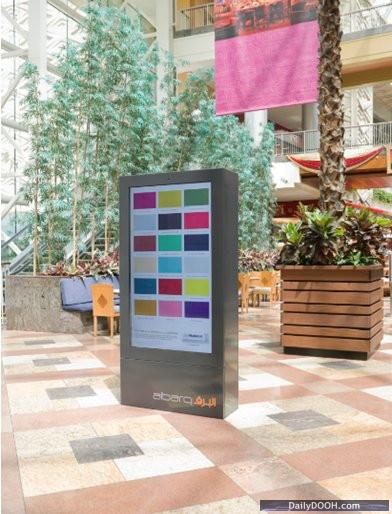 Interactive screens yet to be attached

So our interest was understandably piqued when we heard at the start of the summer of a start-up that has the backing of one of the oil-rich Emirates.

Al Barq Digital has now turned on the first of its screens in the Dubai Festival City mall, with plans to put their large advert screens in the bigger, better malls around the Emirates and Middle East. The Al Barq brand is owned and operated by Abu Dhabi Media Digital Out Of Home (AD Media DOOH), which is a subsidiary of Abu Dhabi Media Company (ADMC), which is in turn owned and backed by the Abu Dhabi government.

Presumably, a lot of the worries property developers would normally raise with start-up media companies go away when AD Media DOOH’s directors explain the set-up 😉

The firm has a five-year digital media rights agreement with the massive 600-store mall, and is putting in 32 ‘Digital Media Units’ (or DMUs as it likes them to be called) that have back-to-back 65” LCDs, as well as adjacent 22” interactive LCD touch screens function as directories and wayfinders. As the picture shows above, the 22-inch units are not yet in place.

AD Media DOOH says its Al Barq Digital mall network will be among the sophisticated in the world, as the DMU stations are equipped with such devices as card readers, Bluetooth and mobile activation capabilities.

A good friend of ours, Andrew Wood and Al Barq’s general manager, tells us “We are determined to support and foster growth and innovation in the digital signage and digital out of home media networks,” . “Bringing to the market such a sophisticated digital signage that combines the influence of mass advertising with the accuracy of niche marketing in delivering messages, is the first step in implementing our digital out of home strategy.”

It’s a nice vertical to start with, given how much people in the Emirates love their malls. We understand typical mall trips last almost three hours, and that the Festival City mall, alone, gets roughly two million visitors each month.

Those are exactly the sorts of dwell time and footfall numbers that work very well in OVAB / DPAA audience measurement calculations!

This entry was posted on Monday, September 20th, 2010 at 07:31 @355 and is filed under DailyDOOH Update. You can follow any responses to this entry through the RSS 2.0 feed. You can leave a response, or trackback from your own site.