Los Angeles-based Health Club Media Network can now offer advertisers and agencies proof positive that the gym is ‘in’ when it comes to product marketing that supports an active, healthy lifestyle. 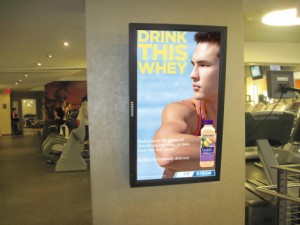 According to research conducted by The Nielsen Company for HCMN, 66% of consumers who work out in gyms served by HCMN say they feel good about brands that advertise in their club. A further 62% indicate they are more likely to pay attention to ads on digital screens at their health club than on their home TV, while more than 60% say that they’re more likely to pay attention to advertising posters in their gym than an ad on an outdoor billboard or in a magazine.

“This is the first time that we had a research project on such a scale and an ongoing scale,” says Richard Hirsch, executive vice-president, HCMN. “And now we will have reports on a monthly basis. Agencies are looking for upgraded information.”

“And,” says Dave Rowley, HCMN president, “as we grow, information like this becomes more relevant. We want to have a bigger impact with agencies.”

Approximately 500 of its clubs are now equipped with one or two portrait style digital screens with another 500 to be equipped by the end of Q1, 2011. The digital screens are 80% dedicated to club content such as meeting information, class schedules, member messages and fitness tips. Advertising by such companies as Lexus, GlaxoSmithKline, Lowe’s and Garnier take up the remaining 20%. The screens are typically placed near the front desk or on a wall between the men’s and women’s locker rooms. 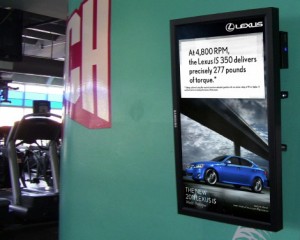 In June, 2010 Nielsen found that the HCMN digital network delivered more than 16 million total audience impressions for its advertisers. HCMN expects this monthly data snapshot to increase as it continues to aggressively build out its digital network. Club goers averaged 3.6 visits per week and stayed, on average, one hour and 20 minutes.

“Our screens aren’t an entertainment vehicle,” says Hirsch. “The digital model allows them to be a digital information centre, essentially an information portal. And they are or can be different for each club or location.”

The Nielsen data shows that consumers enjoy receiving product samples at their health club. In fact, 72% of respondents agreed that getting free samples such as shampoo, cereal and energy drinks or bars at their health club is a great way for them to learn about products. HCMN has found that redemption of coupons for products sampled at the club is high.

“There’s an implied endorsement by the club,” says Rowley. “It’s sort of ‘My club thinks it’s good so it’s a product I should use’.”

Bob Porcaro, group account director at OMD, says, “Gatorade remains committed to addressing the unique needs of fitness athletes, and HCMN has been a fantastic partner in helping OMD get the Gatorade messaging in front of these athletes in environments where the message will be especially relevant. We have taken advantage of several HCMN platforms including panels, digital screens and sampling.”

Other research data revealed from the Nielsen study showed that 23% of respondents said that they were likely to purchase or lease a car in the next year; and 70% said they would likely be making a travel purchase, such as airline tickets, a cruise and/or hotel stay in the next year.

“We always knew health club consumers were an influential group,” says Rowley. “The Nielsen data underscore just how important, with nearly 85% believing they are influential with their friends and family when it comes to making major purchases.”

We asked Rowley his opinion about audio or lack of same on screens in clubs. He says that Nielsen’s data shows that 65% of gym members bring their own personal listening devices to use when they are on cardio machines.

Rowley also told us that the company is going through a period of rapid growth, and expects to add another 500 clubs to its network over the next six months.

“A lot of people in the U.S, want our products,” he says. “They see it as an opportunity for the future. The advertising and monetizing comes into focus later.”

The Nielsen data cited used two separate methodologies. For audience impression, Nielsen surveyed consumers, ages 16 and older, from its master database of health clubs installed with HCMN. Qualitative data was compiled from a national intercept study conducted June 15 – July 1, 2010. The data, published by Nielsen as a monthly pocket piece, is available from Nielsen or HCMN.

This entry was posted on Monday, September 27th, 2010 at 13:30 @604 and is filed under DailyDOOH Update. You can follow any responses to this entry through the RSS 2.0 feed. You can leave a response, or trackback from your own site.