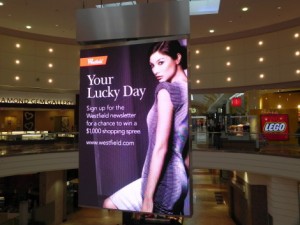 Westfield Media Group is a property of The Westfield Group, and has been set up to bring its large format DOOH boards to the Westfield malls in top DMAs across the United States. The Westfield Group, based in Australia, claims to be the world’s largest listed retail property group by equity market capitalization. The Group has interests in and operates a global portfolio of 119 high-quality regional shopping centers in Australia, New Zealand, the U.K. and the U.S., valued at more than $59 billion. It works with over 23,700 retailers across more than 10 million square meters of retail space, and its large format boards are already seen in Australia and the U.K..

With 55 Westfield Malls across the U.S., you can expect to see the Westfield Media Group bring its new network into many of the top DMA’s next year.

“We started with four of the top malls and will officially launch the network in January,” says Craig Ferber, vice-president, based at Westfield Media Group’s U.S. headquarters in L.A.. “We wanted to test everything – location, how it works, interactivity – and get it right before moving to phase two.” 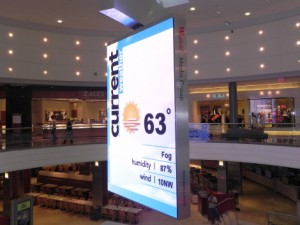 Ferber and David Askew, senior vice-president, both worked for JCDecaux and most recently Cemusa before joining Westfield in January to start the Westfield Media Group.  They believe that the large format boards are a first in U.S. malls, pushing the boundaries of technological innovation, and delivering a ‘can’t-miss’ showcase for consumer brands.

The displays in the Digital Spectacular Network are double-sided and rotate to deliver maximize visual impact in high traffic, high visibility districts. (The Chicago Mall is the exception since it is an outside mall so the board is one-side only without rotation.) Each LED screen is a versatile digital content platform able to accommodate advertising, live feeds, custom content and full motion video. 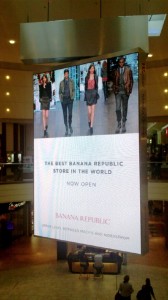 The screens play an 8-minute loop, comprised of 50% advertising (contracted by advertisers in 15 second spots), 25% mall marketing, and 25% news feeds, sports, and weather. Advertisers can also buy one side domination. The company is working with Daktronics for installation and is using Daktronics’ Visiconn Display Management system. It is also working with Scarborough Research for third party measurement.

Westfield Media Group has put a senior sales person in position in each of New York, Chicago, L.A. and San Francisco and Ferber and his staff say that initial response has been terrific. In addition to offering advertising spots, the company is also marketing the opportunity for sponsored content, Sports, News, Weather, Time, Entertainment and any other featured news-information topics with which an advertiser might wish to be associated.

Further, Westfield Media Group is interested in working with marketers who use high profile digital displays to engage customers in an interactive way through the use of technology that allows people to use their smart phones to answer questions and polls, play games and upload photos or other user generated content.

This entry was posted on Wednesday, November 3rd, 2010 at 10:02 @460 and is filed under DailyDOOH Update. You can follow any responses to this entry through the RSS 2.0 feed. You can leave a response, or trackback from your own site.