In regards to the new Disney store opening in New York and the related Disney billboard in Times Square, as noted by JP Blamby’s article last Friday, we’re pretty impressed by the technical aspects regarding the board – and the fun of the store opening. 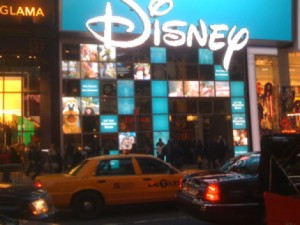 Nearly 10,000,000 LEDs in total are on the board. The 7.2 megapixel display has nearly four times the resolution of High Definition Video. The display formats content specifically: a 10-minute animation exceeds 480 GBs.

“The Disney Store opening, along with its spectacular digital billboard, is both literally and figuratively a powerful sign of our continuing commitment to the growth and vitality of Times Square,” said Gerald Griffin, senior vice-president, ABC Regional Sports & Entertainment Sales. “This glittering digital platform, carrying the magic of the Disney brand, expands the tremendous opportunities available to ABC Regional Sports & Entertainment Sales clients in an iconic New York City area aptly known as ‘the crossroads of the world.’”

“Disney Stores play a critical role in how millions around the world experience our brand,” Iger said. “The new store design allows kids and families to have a fun and immersive experience while shopping for their favorite Disney products.”

Disney Store’s digital billboard played an integral role in the celebration as exclusive clips from upcoming highly anticipated Disney holiday films Tangled and TRON: Legacy were shown to thousands of fans in Times Square during the grand opening ‘pre-show’.

Vornado Realty Trust was sponsor of the Disney Store Times Square grand opening event. Vornado is one of the largest owners and managers of commercial real estate in the United States with a portfolio totaling over 100 million square feet, primarily located in the New York and Washington, DC metropolitan areas.

This entry was posted on Monday, November 15th, 2010 at 07:35 @358 and is filed under DailyDOOH Update. You can follow any responses to this entry through the RSS 2.0 feed. You can leave a response, or trackback from your own site.

One Response to “Disney’s Billboard And Store At Times Square”