Earlier this week I was given a ‘sneak peak’ at the new Clear Channel Outdoor digital shelters that will be unveiled in the city of San Francisco next week. What is unique about these displays? They feature interactive games that people can play while waiting for public transit. Users can even go online later to see how their score ranks amongst all players. 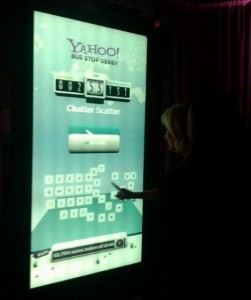 The event was held at the offices of Obscura Digital who teamed up with Yahoo!, Goodby Silverstein & Partners, Manufacturing Resources International, ACNE Production and Clear Channel Outdoor to bring the screens to life.

I was told “The Yahoo! Bus Stop Derby is a first of its kind Interactive Digital Transit Shelter campaign that invites San Francisco public transit users to engage in a neighborhood-on-neighborhood gaming competition. Users will challenge each other in four fun and engaging interactive games themed around Yahoo! mobile apps – all on groundbreaking 72″ HD LCD touch-screens located in select city transit shelters.”

Yahoo’s involvement was the most interesting to me as, despite rumors in the Valley of mass layoffs, this is clearly a sign the company is still actively pursuing new and exciting opportunities.

This entry was posted on Friday, November 19th, 2010 at 10:02 @460 and is filed under DailyDOOH Update. You can follow any responses to this entry through the RSS 2.0 feed. You can leave a response, or trackback from your own site.