We fell off of our collective chairs when we got an email from Trumedia indicating that they had shock, horror taken money out of theirs (or more likely someone else’s) pocket and actually stumped up for a booth (ostensibly of their own) at next February’s #ISEUROPE event in Amsterdam… 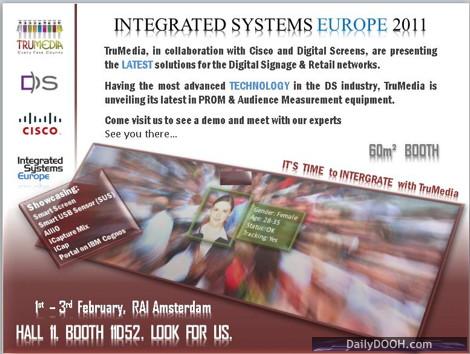 Once we were on the floor though, they didn’t let us down (any further) and gave us plenty to ponder and laugh about.

We originally doubted if Cisco would have much involvement but as Cisco’s (relatively new) European Sales Director for Cisco’s Digital Media solutions is based in Barcelona you might find that all three, do indeed, make strange enough bedfellows.

Having said all that it is actually very good that they are exhibiting.

This entry was posted on Tuesday, December 14th, 2010 at 16:40 @736 and is filed under DailyDOOH Update. You can follow any responses to this entry through the RSS 2.0 feed. You can leave a response, or trackback from your own site.