The campaign’s message is an offer by Rogers allowing its customers to share their smartphone data bucket between their devices. 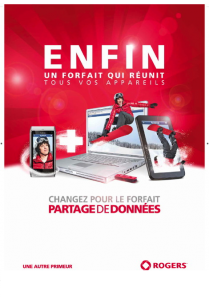 “More and more customers own more than one wireless device,“ says Simon Parent, director of marketing and communication at Rogers. “However, they hesitate to subscribe to more than one data plan at a time. We wanted to promote a plan that was flexible enough to allow for sharing data on multiple devices. Simply put, the plan enables users to share their smartphone data with their tablet or Internet stick for laptops.”

The campaign, developed by Montreal ad agency Marketel, targets real ‘pros’ who regularly use several different mobile devices and use them everywhere.

This entry was posted on Tuesday, February 15th, 2011 at 10:01 @459 and is filed under Scuttlebut. You can follow any responses to this entry through the RSS 2.0 feed. You can leave a response, or trackback from your own site.

One Response to “Digital Plays Big Role In Rogers Campaign”