JCDecaux’s three sided rotating ‘toblerone-shaped’ blades billboards, otherwise known as Trivision, Prismavisions or Ultravisions, are to be discontinued and replaced by a variety of formats including digital. 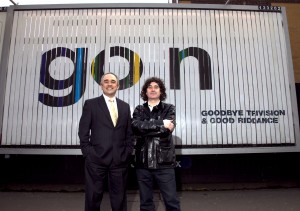 Spencer Berwin, MD of Sales at JCDecaux and Trevor Beattie on Trivision switch off at Tottenham Court Road

Trivisons were an innovation in display when they were first launched 30 years ago as they enabled three creatives to be shown on one site, however their benefits have been surpassed by digital with its ability to provide time-sensitive creatives, multiple copy changes, countdowns and location specific advertising.

Trevor Beattie, Founding Partner of Beattie McGuinness Bungay and one of the format’s strongest critics was invited to switched off JCDecaux’s last-remaining Trivision.

Talking at the Cannes Advertising Festival in 2003, Beattie said, “Neither me nor my clients want to see our ad shredded into a hundred little strips and revolved around at a rate of knots only to be replaced by a big silver car 4 seconds later or some awful airline ad.   If there is anyone watching who invented the Trivision site, could you please invite me to the, what’s the opposite of inaugural bash? When they finally take down the last revolving ‘Toblerone site’, can I be there and do the opposite of Cut The Ribbon?  To unplug it or switch it off?  Enough!”

JCDecaux’s move comes as part of the company’s market-leading investment in Outdoor which has seen the launch of the first Tower superstructure advertising structures, the roll-out of digital nationwide, the introduction of the Première billboard brand and High-Definition billboards – the first recyclable posters.

At the switch-off Trevor Beattie said, “It gives me great pleasure to switch this last Trivision off.  I love the idea of switching something off  – sort of unlaunching it. I want to say thank you for being bold enough to take me up on my challenge.”

Introduced to the UK market by Maiden Outdoor in 1980 with a site at Waterloo Station, JCDecaux introduced the format in 1983. By early 2010 JCDecaux had 150 sites which have now been replaced with a range of formats including digital, High Definition, Première and scrolling billboards.

This entry was posted on Monday, February 28th, 2011 at 07:50 @368 and is filed under DailyDOOH Update. You can follow any responses to this entry through the RSS 2.0 feed. You can leave a response, or trackback from your own site.