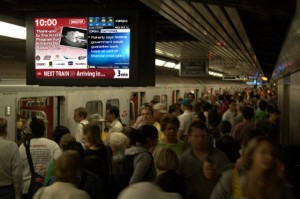 “Pattison Outdoor’s acquisition of Onestop Media Group enables us to offer a broader range of innovative digital solutions for our advertisers to reach their audience, using the digital networks and dynamic media technology of Onestop,” says Randy Otto, president of Pattison Outdoor Advertising. “Onestop is already taking over content management of our Business Elevator Network and our Calgary Airport digital business as part of its business.”

Girgis, who reports to Otto, remains president of Onestop and all other executives and sales staff remain in place. Pattison’s own sales staff will continue to sell its outdoor traditional and digital boards and the mall network, where Pattison was already in partnership with Onestop.

“”We’re excited about the team of people joining Pattison,” says Otto. “Our own people are specialists in what they sell, and we believe that its important to have people dedicated to selling unique opportunities, so, while we expect there’ll be some crossover, the sales staffs will continue with their own specialties. This acquisition really allows us to enter deeply into the world of digital media.”

Jake Neiman, co-founder and COO of Onestop, says, “By combining strategies, resources and expertise, Pattison and Onestop will rapidly expand our consolidated digital media offerings to benefit the advertising industry”.

“Our first focus is to standardize all the platforms and to bring everything up to speed,” says Girgis. “We realize that the biggest gap in the industry is to bring relevance and reach to clients. The industry has been looking for a group that can bring them everything, and they now have it.”

Girgis says that, having worked together over the past couple of years in the mall sector, it made each realize that they had a commonality in the way they do business and this is an extension of their vision. “We reached out to each other,” he says.

Pattison’s acquisition does not include Fourth Wall Media, which continues to be 100% owned by Girgis and the other original four partners. Fourth Wall, which celebrates 10 years in existence in April, 2011, is a creative and interactive digital agency which will continue to supply creative to Onestop.

With the Toronto Transport Commission’s contract, currently held by Onestop, coming up for bids later this year, it is expected that the Pattison connection will help strengthen Onestop’s bid against such likely competition as Clear Channel Outdoor and Astral Media. The upcoming bid involves the TTC bus system but will not include Onestop’s signage in Toronto’s subway system, which Onestop holds until year 2020.

“I think the with Pattison behind us, it shows that we have even more flexibility in all our offerings,” says Girgis. Onestop is currently hoping to expand in the Toronto School District schools. (See our March 14/11 article.Ed.

This entry was posted on Tuesday, March 22nd, 2011 at 18:40 @820 and is filed under DailyDOOH Update. You can follow any responses to this entry through the RSS 2.0 feed. You can leave a response, or trackback from your own site.