Clear Channel Outdoor Canada, which has been participating annually in Earth Hour, is going all out this weekend, with all of its Spectaculars billboard inventory in Toronto due to be shut down from Friday, March 25, and turned back on Monday, March 28. 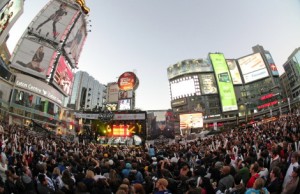 In addition, exterior advertising at Toronto-Pearson Airport will be shut down – including the iconic Samsung Hand – at the same time from Friday, March 25, and turned back on Monday March 28.

And in ‘Canada’s Time Square’ ie. Dundas Square, the shut down will range from Saturday March 26 8:30 pm to 9:45 pm, including the Atrium On Bay Tower, The Toronto Eaton Centre Tower, the 10 Dundas Street East Media Wall and the Dundas Square Digital screens.

It’s all part of Clear Channel Outdoor’s international recognition of this environmental cause to raise awareness of climate change.

This entry was posted on Friday, March 25th, 2011 at 07:00 @333 and is filed under DailyDOOH Update. You can follow any responses to this entry through the RSS 2.0 feed. You can leave a response, or trackback from your own site.