Clear Channel Spectacolor and Takara Media, a leading Japanese advertising agency, today are announcing a PSA campaign to drive contributions through the American Red Cross to help victims of the devastating earthquake in Japan and tsunami throughout the Pacific. 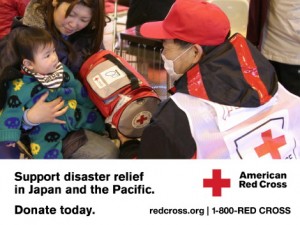 This digital campaign is just one of several American Red Cross relief efforts that Clear Channel Outdoor as a whole is initiating across the U.S.. Other markets include: Indianapolis, Ocala, Los Angeles, Milwaukee, New Jersey, New York, San Francisco and Seattle.

Clear Channel Spectacolor is donating time on its SpectacolorHD digital billboard, located in the heart of Times Square, to run the 15-second Takara-commissioned Red Cross spot twice per hour for four weeks. The PSA alerts pedestrians to assist those affected by the natural disasters and directs them to www.redcross.org and 1-800- RED CROSS.

Clear Channel Spectacolor is a powerful out-of-home platform that captures the attention of more than 500,000 people daily in Times Square. The Company hopes to leverage that platform on behalf of Takara Media to help those displaced by the tragic series of events in Japan and throughout the Pacific region.

Set in the “Crossroads of the World,” the SpectacolorHD board is located on 47th Street and Broadway, opposite Father Duffy Square and the striking TKTS Booth with its red glass amphitheater-style staircase.

The campaign will run April 1-29

This entry was posted on Friday, April 1st, 2011 at 10:00 @458 and is filed under Scuttlebut. You can follow any responses to this entry through the RSS 2.0 feed. You can leave a response, or trackback from your own site.