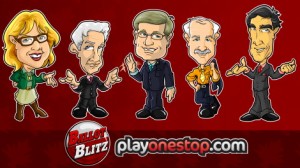 Timed to coincide with the current campaigning leading up to Canada’s voting day May 2, Ballot Blitz is accessible online through Onestop’s consumer site and is promoted nationally to the millions of people viewing Onestop’s portfolio of Digital Out-of-Home Networks across the country.

Playonestop.com also features a series of fun election-specific polls and content. Over the real campaign period, Onestop is using the digital media channels, PlayOnestop.com, Twitter, and Facebook, to promote several creative polls as an alternative to the dozens of scientific polls and ‘more-serious’ election media.

The digital and interactive campaign largely targets what is recognized as an untapped voting community of 18 – 34 year olds.

“History shows youth engagement leads to next generation voters,” says Michael Girgis, president and CEO, Onestop Media Group. “As a Canadian company immersed in the digital landscape, we have the mandate and social responsibility to do just that: help the communities in which we operate engage youth in this federal election in a fun fashion relevant to their generation.”

As an incentive, Ballot Blitz players are eligible to win an Apple MacBook. The contest closes Friday, April 29 at 5:01pm..

This entry was posted on Thursday, April 21st, 2011 at 10:02 @459 and is filed under DailyDOOH Update. You can follow any responses to this entry through the RSS 2.0 feed. You can leave a response, or trackback from your own site.