Well, from our viewpoint, the Scala Connected Signage Conference seems to be a smashing success, based on the connections made between attendees, the meetings that one and all seemed to be setting up leading to potential business arrangements, and the learning curve from innumerable speakers who all spouted words of wisdom that might be used to help grow business. 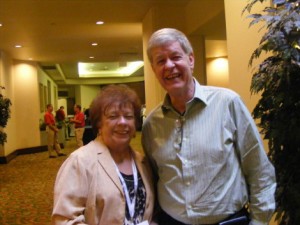 In fact, we overheard several people bemoaning the fact that this was the first such conference in the U.S. since 2008 and that they’d like to see one every year or, at least, every two years.

Those attending were from the U.K., The Netherlands, Australia, Canada and the U.S., and we had many interesting chats, including with Oscar Elizaga, Scala vice-president who is moving from Europe to Miami as he adds responsibility for Latin America to his current responsibilities for EMEA and India.

The Scala team have been out in force in their red and black shirts (we like the red) and Wednesday night, Tom Nix, Scala’s vice-president Americas and Oceania, paid tribute to three installations that were particularly noteworthy over the past year – all, of course, running with Scala management. They were Camelback Toyota in association with Unified Brand, Bell Canada in association with Jigsaw, and 4-Food with Zero-In Media.

The conference concludes Thursday with training sessions, after a full two days of conferences. We sat in on various speeches and breakout sessions, and while we can’t cover each in depth, over the next few days, we’ll be reporting on several of them.

This entry was posted on Thursday, May 5th, 2011 at 06:59 @333 and is filed under DailyDOOH Update. You can follow any responses to this entry through the RSS 2.0 feed. You can leave a response, or trackback from your own site.