A new digital signage software/player/screen bundle from signagelive that simplifies and fast-tracks deployments – at half the cost of similar offers – will have its debut at next week’s #ScreenMediaExpo we are told. 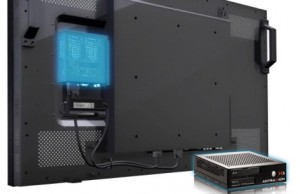 The bundle combines signagelive’s web-based software with a 42-inch Philips commercial LCD and a powerful, small form-factor Advantech PC that fits into a universal slot in the rear of Philips ‘Smart Insert’ displays.

Jason Cremins told us “We’ve seen solutions come on the market that have put some disparate elements together into bundles that are marketed as fast and easy, but there’s been a problem. The solutions we’ve seen either require a series of compromises, or the overall price is off the chart in terms of cost. This new bundle, we think, ticks all the proper boxes.”

Cremins says the bundle’s overall cost is roughly 50 per cent that of competing offers on the market, and comes with a three-year warranty and ongoing signagelive support.

The stand has a large live demo area intended to show signagelive’s open architecture solution for scheduling and managing ad-based, retail and private communications networks of any scale.

“We’ll also bring a little bit of Glasgow to the show,” says Cremins, explaining how the stand will include a display unit similar to the Primesight digital out of home advert screens now running in that city’s subway system. “We’ll be showing live news from Scotland TV and adverts, through our integration with Key Systems’ media planning platform.”

signagelivesoftware is also powering a cascading set of escalator panels demonstrated at Melford’s stand, showing player synchronisation to within 1/100th of a second, and a configuration that steadily auto-corrects itself for timing.

Also on display and driven by signagelive, 10 Squared’s retail-centric screen fixtures and the first showing of a new iTaxitop offering from Eyetease Media.

This entry was posted on Tuesday, May 10th, 2011 at 06:57 @331 and is filed under DailyDOOH Update. You can follow any responses to this entry through the RSS 2.0 feed. You can leave a response, or trackback from your own site.