The World’s Biggest Installation Of MicroTiles

Very very early Tuesday morning we witnessed the unveiling of the World’s biggest installation of MicroTiles. The MicroTile count currently stands at an impressive 508 but by all accounts it’s actually set to get bigger, so pleased is the client with the end result. 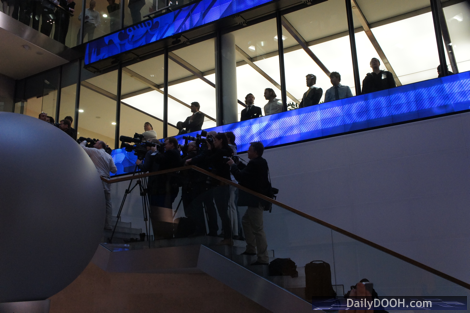 As an accredited journalist I was lucky enough to be invited by the London Stock Exchange to witness the event along with dozens and dozens of photographers (shown above gathering on the stairs under one of the two MicroTile ‘fingers’), several film crews and reporters from the business and financial press. There were no AV or industry press in attendance.

Nine Scala players and six Vista Spyders run the 508 MicroTiles arranged in a series of walls and fingers: one mosaic, four fingers, one main wall, one presenter wall and a command and control wall.

The previous largest MicroTiles install was the NASCAR Hall of Fame made up of 252 MicroTiles.

This entry was posted on Tuesday, May 10th, 2011 at 18:25 @809 and is filed under DailyDOOH Update. You can follow any responses to this entry through the RSS 2.0 feed. You can leave a response, or trackback from your own site.

One Response to “The World’s Biggest Installation Of MicroTiles”