A huge cluster of Christie MicroTiles is driving the fan experience at the new NASCAR Hall of Fame in Charlotte, North Carolina.

Auto racing fans will be amazed by the exhibits and revolutionary AV technology at the 150,000-square-foot interactive, entertainment attraction. A huge cluster of Christie MicroTiles digital display tiles is driving the fan experience running massive archival videos and engaging visitors in the attraction’s showpiece Great Hall. 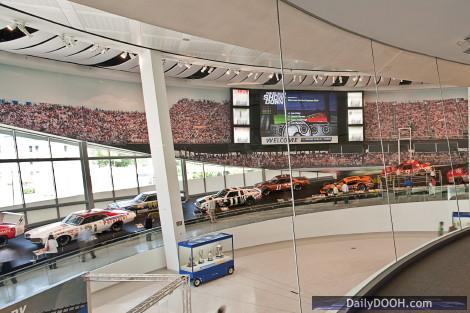 The NASCAR Hall of Fame’s Fan Billboard uses 252 MicroTiles in an 18-tile wide by 14-tile high array (24’ x 14’) suspended over Glory Road, a section of sloping track in the main hall that shows the progression of NASCAR from its dirt track days to the modern paved speedways of today. The NASCAR Hall of Fame’s main visitor orientation theater also uses Christie’s powerful digital projectors and video processors to bring NASCAR’s history to life.

“The NASCAR Hall of Fame is the first entertainment venue to feature Christie MicroTiles,” says Winston Kelley, executive director, NASCAR Hall of Fame. “It’s our goal to deliver an interactive experience to each and every visitor, and our unique MicroTiles billboard gives an authentic feel as soon as our guests enter the building.”

Opened on May 11, 2010, the entertainment attraction gives NASCAR fans a place to learn about stock-car racing’s long and colorful history and its most celebrated figures. The NASCAR Hall of Fame is owned by the city of Charlotte and operated by the Charlotte Regional Visitors Authority under a license with NASCAR.

Designed by famed architectural firm, Pei Cobb Freed & Partners, New York,, with exhibits designed by the internationally acclaimed firm of Ralph Applebaum Associates Inc., New York, the hall’s design borrows on the sweeping curves of race tracks. A metallic ribbon runs around the building façade, and carries that design element inside to the expansive four floors of exhibit and attraction space.

The soaring heights, curves and glass curtain walls that dominate the venue presented unique design challenges that were addressed by using the Christie MicroTiles – modular digital display tiles that can be stacked and clustered like building blocks to create display walls of any shape or scale. The patented MicroTiles use an entirely new, advanced optical design that produces unparalleled levels of brightness, contrast and color reproduction.

The consulting AV design firm overseeing the project, JaffeHolden, Norwalk, Connecticut, was struggling to sort out what display technology could best suit the curving space above the faux Glory Road track without projecting the screen too far into the hall. Working with the Burbank, California offices of Electrosonic, an international audio-visual company specializing in AV systems integration and services, the team reviewed a number of technologies. After seeing a preview of the MicroTiles at Christie Digital System‘s R&D labs, Kitchener, Ontario, months before the technology’s commercial launch, both JaffeHolden and Electrosonic recommended them to the city’s project management team.

“Glory Road is a centerpiece of the Great Hall and the Fan Billboard which crowns Glory Road is ideally suited to MicroTiles,” says Zoran Veselic, vice-president of Christie’s visual environments division. “Whether they are displaying historic NASCAR footage or bringing the excitement of a live race to visitors, Christie MicroTiles are the largest installation of the technology, to date, and deliver a larger-than-life experience fans have never seen before.” 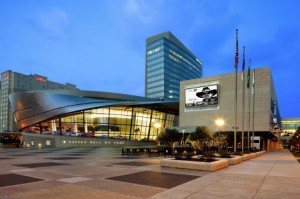 The Fan Billboard runs archival footage from the early days of stock-car racing, as well as video and image montages, and an interactive application called the NASCAR Hall of Fame Showdown. When guests pay admission to enter the attraction, they are issued personalized ‘hard cards’ with embedded RFID chips. As part of the overall fan experience, the hard cards can be used at more than 50 interactive kiosks throughout the facility.

Another focal point of the entertainment attraction is the 278-seat Belk High Octane Theater, which has a huge, 64-foot wide curved projection wall showing the story of NASCAR from the early days to present. This orientation theater uses the output from three edge-blended Christie HD10K-M DLP digital projectors to produce one seamless visual. A fourth HD10K-M is used for off-hours presentations.

The visuals are all driven by Christie’s Vista Spyder, a powerful and versatile video and widescreen display processor that allows the museum to mix video sources in multiple windows, create multiple picture-in-pictures, and define, shape and blend borders easily.

This entry was posted on Thursday, August 5th, 2010 at 17:28 @769 and is filed under DailyDOOH Update. You can follow any responses to this entry through the RSS 2.0 feed. You can leave a response, or trackback from your own site.

One Response to “MicroTiles Drives NASCAR Hall Of Fame”