Located near the Montreal Canadiens practice facility, the MTM boasts an innovative multimedia lounge concept aimed specifically at tourists, featuring 23 screens, seven of which are interactive.

“We wanted to update the concept of the tourist facility and transform it into a more dynamic, engaging space by capitalizing on digital signage and experience-based technologies,” says Éric Fournier, executive director, Tourisme Montérégie. “The Arsenal Media team has supported us in our efforts to align these solutions with our marketing strategy and our approach to the people we serve. The result has received compelling feedback from the 385 member organizations of Tourisme Montérégie as well as the general public.”

The MTM is in many respects the nerve centre for tourism operations in the Montérégie region. It provides information on local culinary, recreational and tourist highlights, a zone for booking accommodations, dining recommendations, interactive displays on themes of interest, and a wide range of reference material on the Montérégie area as well as other regions throughout Quebec. The interior design is the work of architects LemayMichaud. 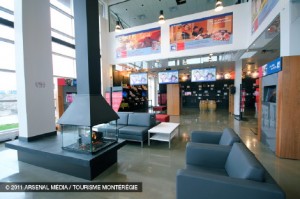 There are screens and interactive stations located in five separate zones: four in the front lobby, six in the multimedia lounge, seven in the culinary discoveries section (featuring local products such as cider, wine and maple products), two at the Réservation Montérégie counter, and four in the hallways and restrooms.

The multimedia and digital signage elements were developed while the initial concept for the facility was in the planning stages.

“Tourisme Montérégie deserves tremendous credit for their vision in this project” says Denys Lavigne, president, Arsenal Media. “Because they made teamwork among partners a priority, we were able to focus on the optimal integration of the layout of the space, the marketing approach, and the digital signage strategy. These are the new standards for creating commercial space in today’s market.”

“We strove to provide Tourisme Montérégie with insightful advice and guidance throughout each of the development phases of the MTM digital signage system,” says Martine Guay, Arsenal Media’s business development and customer service manager and the MTM project manager. “This site will undoubtedly serve as an example for other tourism information and promotion facilities in the province, both for its design and its user-centric approach.”

Visitors to the MTM have access to a wealth of digital content on the area’s main attractions: bicycle touring, cider-making facilities, business tourism, maple products, apple orchards, summer getaways, weddings, and wineries. This is rounded out by information on the history of the Montérégie region, profiles of accommodations and events, and vignettes showcasing the natural beauty of the landscape. 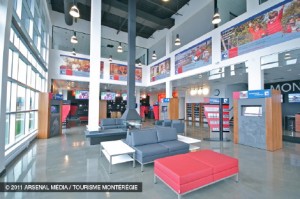 In addition to advising Tourisme Montérégie on technology strategy, Arsenal Media worked to establish digital content standards, produce a number of informative videos and create soundscapes adapted to the MTM lounge concept. Looped content was strategically developed based on the various zones and circulation patterns within the facility. The project came to fruition because of the invaluable contributions of several partners, including Genesis Intégration for installation services, M’Pact for software management, Exposition TCD for the kiosks and structures, and NEC for the display screen solution.

Tourisme Montérégie is a regional tourism association and private organization that brings together some 385 tourism companies in the Montérégie region. Its main mission is to coordinate local development, promotion, hospitality, and tourist information services.

This entry was posted on Thursday, May 12th, 2011 at 10:02 @460 and is filed under DailyDOOH Update. You can follow any responses to this entry through the RSS 2.0 feed. You can leave a response, or trackback from your own site.