A Proverbial Who’s Who

We love people watching as you know and it was fascinating over the last few days at #ScreenMediaExpo catching up with old friends and making many new ones. All the regular industry folks were in attendance but like on other booths, we didn’t have that much time to chit-chat during show hours so busy were we all in making new acquaintances. 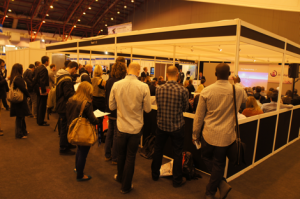 Standing room only at many of the theatres

However, some of the regulars we did spot or manage to have a quick chat with included: –

In terms of prospects and new people there seemed to be loads and loads; we spied folks from Liverpool FC, the Imperial War Museum, Harvey Nichols and we even met some nice people setting up a private members club in Chelsea who visited the show to look at screens and interactive technology. Some booths were saying that they had as many as 100 good leads by the end of the show. Scala’s Damon Crowhurst told us that there were outstanding end users at the event, amongst those he spoke with were from the British Airport Authority, Luton Airport, Bloomberg and Odeon Cinemas.

It was also nice to see all the major media buyers at the show on day 1 and loads of network owners and OOH folks on both days 1 and 2 – including from Paris Futuramedia as well as networks from as far away as Brazil.

This entry was posted on Thursday, May 19th, 2011 at 22:41 @987 and is filed under DailyDOOH Update. You can follow any responses to this entry through the RSS 2.0 feed. You can leave a response, or trackback from your own site.

One Response to “A Proverbial Who’s Who”