While Adrian and Geny have written about Verifone’s new screens that are currently undergoing pilot testing in 300 London cabs, I ‘m adding in on the topic, as well. 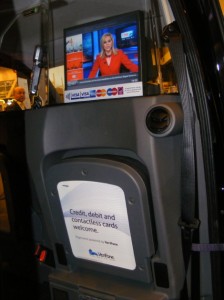 First of all, I have to say that the screens are much more attractive as well as brighter than screens I’ve seen in New York cabs, or anywhere else, for that matter. And the sound can be controlled well, which is a big bonus. (Verifone took over the N.Y. Yellow Cabs business from Clear Channel Taxi Media in Jan./2010 and has screens in some 12,200 of 15,000 cabs – but these new screens are just much nicer than any I’ve seen.)

“Payment-enabled media is our space,” says Jawad Siddiqui, Verifone’s head of media for the UK. Siddiqui says that putting the screens into London cabs is an investment of GBP30 million, and that the aim is to have them in 5,000 London cabs by the end of 2011.

The screens in the pilot study are testing content. Siddiqui says that the content must be short bits, because the length of cab trips varies, but that one-quarter of each screen will always have an advertising banner.

Verifone also has screens in cabs in Las Vegas, Miami, Chcago, Boston, Washington D.C., and is evaluating other cities. It uses its own software and handles its own advertising sales.

This entry was posted on Tuesday, May 24th, 2011 at 06:00 @291 and is filed under DailyDOOH Update. You can follow any responses to this entry through the RSS 2.0 feed. You can leave a response, or trackback from your own site.